The passage of time

A good friend of mine from Milano, Vittorio Pisapia, read my last posting and told me that when he went to Pamplona in 2006 for the Fiesta he had two images of my grandfather in mind. The first was the one I used in “The Undefeated”, of Ernest as an old man in 1953 watching a bullfight with his wife Mary, while the second photo (below) is of a much younger and more vigorous man taken in 1927. 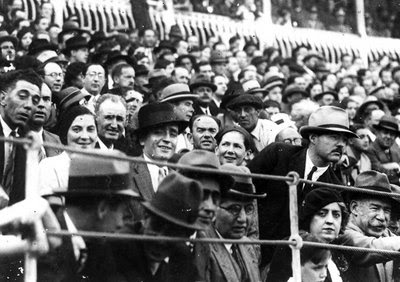 I told him that the fact that he had these two photographs of Ernest in mind reminded me of what I’d written in another posting “El Doble”, mirror images of the same man, distorted by time.

But Vittorio disagreed. “In my opinion it’s not quite the same thing, or better yet, there is a connection, it’s true. But while in “El Doble” you talk about the death of Pablo and of Ernest who probably was there while all of this was happening and who sees Pablo, the two photographs of Ernest speak of two different moments and of two different people, even if the person and the place are exactly the same. In between these two photos there’s an entire lifetime.”
Posted by John Hemingway at 9:11 AM No comments:

Ernest Hemingway was a complicated man and so whenever someone asks me what I think of his enduring macho image or what he himself might have thought about the world today and its problems, I usually say that there were many different “Papas.” He was certainly a man’s man, un vero hombre, who liked to fish and to hunt and to womanize, but he was also the author of the gender bending posthumous novel “The Garden of Eden” and many other works where he examined his lifelong fascination with androgyny.

Likewise, it’s hard to pin him down politically. When a journalist in Pamplona asked me what I thought my grandfather would think about Guantanamo and its torture scandal, I said that these were crimes against humanity and that, obviously, Ernest, were he still alive, would speak out against them. My grandfather, I reminded the journalist, supported the Republican cause in the Spanish Civil War. He was a democrat in the sense that he believed in democracy and the right of the Spanish people to have a Republic, if that was what they wanted.

Of course, his support wasn’t limited to his bylines or his novel “For Whom the Bell Tolls.” In addition to raising money in the United States to buy ambulances for the Republican Army, he also did the narration for the Republican propaganda film “The Spanish Earth.” Without a doubt, what he experienced in Madrid during the war affected him deeply, and when the Fascists won he said that he would never return so long as they were in power.

It was a promise he kept until 1953 when he returned to Spain with his wife Mary. By that time, even though he was only 54, he was ageing fast and he wanted to see the corridas again before he died and to be a part of that world of toreros, bulls and muletas.

His return was widely criticized by many on the Left, who said that it was a betrayal of his ideals and everything that he had written about during the Civil War. Certainly, having the author of “The Sun Also Rises” back in Spain must have been a PR coup for the Franco regime. It was the kind of publicity that money could never buy, but Ernest had already fought his battle, and had lost, and there was nothing he could do about the political situation. Franco ruled the country with an iron fist and would outlive my grandfather by fourteen years.

The irony of all this is that while he was in Spain as a special guest of the regime his own government continued to spy on him. He had long been considered a leftist and a potential subversive by the FBI and its chief, J. Edgar Hoover (in part because of his support of the Spanish Republican cause), and the file that they kept on him grew and grew over the years until it numbered over 19,000 pages.

Yet, in spite of what anyone may say about him and his decision to return to Spain, perhaps Ernest wasn’t so wrong in having an ambivalent attitude towards politics. Looking over the political landscape of the USA today and the absolute disregard that both Republican and Democratic politicians have for the will of the people, I’d say that not much has changed since the 1950’s. We may have voted in 2006 to end the war in Iraq, but the political elite continues to do what it wants, to wage its wars and spy on us regardless of what we think. None of them can be trusted and perhaps the only thing that matters in the end is living your life as best you can. As my grandfather did, ignoring the bastards in power.
Posted by John Hemingway at 10:09 AM 4 comments:

Here's a video of the first encierro, the 7th of July, and a short interview that I did afterwards with a journalist from Canal Cuatro.

Posted by John Hemingway at 8:08 AM 5 comments:

Yesterday was the 84th anniversary of the first recorded death in an encierro during the Fiesta de San Fermin. Esteban Domeño was mortally wounded by a bull in Calle Estafeta and I know about this not because I’m any sort of historian of these tragic events but because of a chance encounter I had.

I was walking down Calle Estafeta towards the curve and had stopped to look at something in one of the stores when my friend, Josep Molina, tapped me on the shoulder and said that there were two filmmakers up ahead that I should meet. It was eleven o’clock and I had already done three interviews that morning but Josep promised me that this had nothing to do with the press or photo ops. They had an interesting idea, he said.

Sergio Oksman and Carlos Muguiro, in fact, were shooting a film about my grandfather and had been inspired by a photograph taken just moments before Domeño’s death in Calle Estafeta. In the photo another young man, Pablo Guerendiain, has been wounded by the bulls and is lying in a fetal position just in front of the store that his father owned. At the same time all this was happening, and just out of the picture, my grandfather was probably watching the bulls and the runners from the balcony of his room in the Hotel La Perla. It was where he stayed when he came to Pamplona and while no one can prove that he was actually there that morning, Ernest had a talent for always finding the best place to be, whatever the occasion, and you really couldn’t find a better observation post than a balcony on the second floor of the Hotel La Perla.

The film then explores the idea of the “double” or what normally lies beyond our field of vision and how often in life what we can’t see, the hidden part of our existence, is as interesting and important as what we do see. In this case we have two young men who compliment each other, Pablo Guerendiain, immobilized and looking at nothing as he prays that any remaining bulls will ignore him, and Ernest Hemingway looking at Pablo and taking in the rush of events that would leave another young man dead on the cobblestones.

Sergio and Carlos sent me a treatment of their story and as I read it and looked at the photograph that had inspired them I thought that it had a lot to do with Ernest’s theory of writing, i.e. that ninety percent of any tale lies just below of what you can see. It is the hidden element of our day to day existence, the unconscious undertow of emotions and events that pulls us along. It is something that we rarely see and when we do we are shocked to have it there in front of us, this shadow of ourselves, a true reflection of who we are.

My memoir, Strange Tribe, from this point of view is another examination of ones “doubles”. I needed to understand my father Gregory and what had gone on between him and my grandfather before I was born (outside of my field of vision), to see how their battle had impacted on my own life. I needed to see clearly the tragic story of two men who were so similar and who loved each other so much that they reached a point where communication was impossible. A family history that perhaps isn’t so different from many others, universal in its own way.
Posted by John Hemingway at 7:28 AM No comments: