Italian Prime Minister Silvio Berlusconi has long been an admirer of America and especially of its current leader, George W. Bush. Berlusconi, whose name in the early 1980's was discovered on the lists of the secretive, far-right organization P2 (led by the noted fascist Licio Gelli), is an ideological soul mate of our War Criminal-in-Chief.

At the recent meeting between the two in Washington, Berlusconi could not control himself and gushed: "You will go down in the history books as a hero, George!" 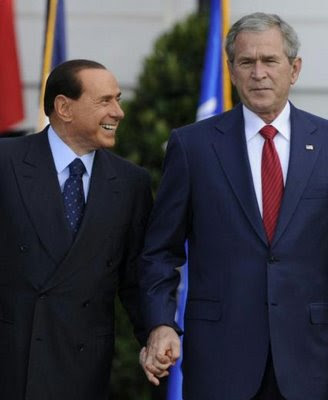 Silvio Berlusconi and George W. Bush at the White House

W then turned to Silvio and said that there was still much to be done in the few months that remained of his presidency. There were the billions, even trillions of dollars to be pillaged from the U.S. Treasury and distributed to Paulson's buddies on Wall Street, so that they would never have to suffer the effects of their risk taking. The Republicans, he sadly admitted to his little Italian friend, would not be in power much longer.

"But the people don't understand you, George, not like I do", whispered Silvio, with a lump in his throat.