Socialism for the rich!

"The first panacea for a mismanaged nation is inflation of the currency; the second is war. Both bring a temporary prosperity; both bring a permanent ruin. But both are the refuge of political and economic opportunists." Ernest Hemingway, (September 1932)

Is this the big one? The financial meltdown that many have been predicting for the last two years? Well, I'm not an expert but when the US government shells out 85 billion dollars to essentially nationalize the world's largest insurance company (A.I.G.) then you know that fundamental changes are afoot. The purveyors of "shock and awe" capitalism, the conquerors of Baghdad, the destroyers of New Orleans and the conduit to the Almighty himself (through W, God speaks to him) have embraced socialism! At least for the rich. 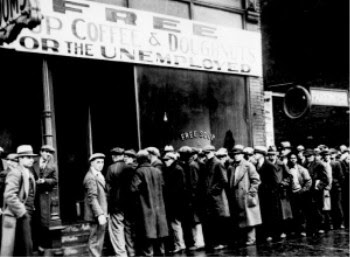 A soup kitchen for the poor during the Great Depression of the 1930's
In fact, far from being a total idiot in finance, I think that John McCain was correct when he said that the economy is essentially sound. Our system of banks, brokers and insurance firms works to protect those in power. It is owned by and run for the elite of the country (the Fed is not a public bank). It's a self-correcting system wherein profits (when times are good and the latest bubble is growing) are privatized, while losses are socialized. US taxpayers and not the Wall Street "players" who caused the meltdown in the first place will foot the bill. We and our children and grandchildren will be paying for this latest fiasco for generations. Which means: no more money for education, or health care, or for rebuilding our decaying cities or for anything that might improve our lives.

Now that is what the elite would call a sweet deal.
Posted by John Hemingway at 5:51 AM 10 comments: 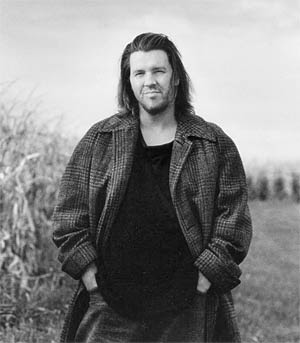 David Foster Wallace
Everyone has their limits. This is what I say whenever I’m asked about the suicides of my grandfather, or of Margaux or Leicester or any of the others in my family. When the pain, be it existential or physical, gets to be too much you can’t really blame a person for what they do.

David Foster Wallace’s death is a tragedy. He took his own life and one of the greatest writers of my generation is gone.
Posted by John Hemingway at 7:25 AM 12 comments: