Castles made of sand

“And so castles made of sand slips into the sea, eventually” Jimi Hendrix
Saturday morning I met a man who makes sand castles for a living. His name was Mark and I saw him when he was setting up the perimeter of his latest creation on Huntington Beach. He’d been hired by the hotel that we were staying at, and he told me that in the summer he was out there almost every weekend. He asked if we were from California and when I told him that we weren’t, that we were visiting from Montreal, he said that we could help him if we wanted. He gave both my daughter and my son a plastic chisel and he put them to work carving a passageway into one of the four towers of the perimeter. 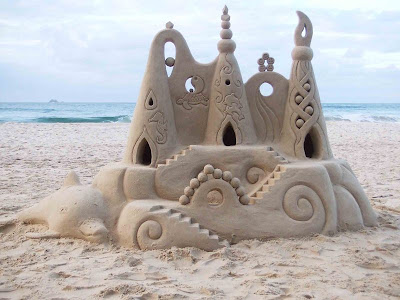 Sand castle
Mark was very serious about his job but extremely patient and gentle when it came to explaining the finer points of his art. We were the first people there that morning and he said that he liked the way my kids worked. “You know,” he told me, “with the economic problems we’re having now we get a lot more foreign tourists than Americans at the hotel and I’ve noticed that the foreign kids are more independent and not as aggressive as the Americans.”

I tried to make light of the situation and told him that my children were far from being little angels, but he insisted and said “I don’t know, maybe we’re doing something wrong.”

I didn’t know what to tell him. I could only speak for my own children. I hadn’t lived in the U.S. since 1985, but I suspected that he was probably right. Aggression has become an American trademark. We are the hoodlums of the planet and I asked him what the people in Huntington Beach thought about the war in Iraq. He said that he and his friends were against it and looking at him I could tell that he felt the same way that I did. That we were both helpless to change anything, and that voting for one candidate or the other in the next election wouldn’t stop the war or our country’s imperial arrogance. The system was rigged and anyone in favor of peace and creating a different world would never get close to the presidency. It was a fact and you didn’t have to be a genius to see how far our democracy had deteriorated. With our “war on terror” and the hundreds of thousands that we’ve killed in Iraq and Afghanistan, we had permanently disgraced ourselves. The American Empire would have to fall, as all empires eventually do, before we could even begin to make up for the damage that we’d done.

The only consolation, I thought to myself, was that not everyone had fallen for the regime’s propaganda and that creative people like Mark would be there to pick up the pieces when the time came.
Posted by John Hemingway at 9:07 AM 13 comments: