There’s a lot to be said for flying on a new airplane. Generally they’re more fuel efficient and quieter, more comfortable, and excluding acts of God and pilot error, a guarantee that you will get to where you’re going in one piece. Still, being fresh off the assembly line isn’t everything.

Up until recently, anyone who wanted to fly the old-fashioned way, with lots of noise, popping ears and serious jolts when the weather got bad, could take a Chalk’s seaplane from Miami to Bimini in the Bahamas. These were vintage Grummans, most of them built in 1947, and they took off and landed in the shipping channel of the city. Chalk’s had been around forever and when I first climbed aboard one in the early 1960’s the airline had already been in service for over thirty years. The owner and founder, Arthur “Pappy” Chalk, was an ex-aviator from the First World War and when I was a boy he was almost always at the ticket counter in the hut next to the water that doubled as a terminal for the tiny airline. My father, Gregory, knew him well, as did my great-uncle Les, and whenever we went to Bimini for a weekend of fishing Pappy would help us with our bags and close the rear door of the Grumman when we were all on board. 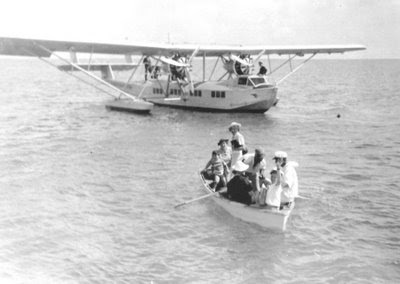 My grandmother Pauline and father Gregory leaving a Chalk's seaplane in Bimini harbor, 1930's
I don’t know how many times I flew to Bimini, hundreds perhaps, but I never got tired of it. There was nothing quite like the sensation of being in a plane that could float into a channel, turn to the left and then soar out over the Gulf Stream. In some of the earlier Grummans there were only seven or eight seats and I remember the view from the small windows, that were actually more like the portholes of a boat, turning white for a minute or two with all the water from the wind and the speed and wondering if we would ever make it.

My father had learned to fly when he lived in Africa in the 1950’s and sometimes when we were airborne and had reached our cruising altitude the co-pilot would let him sit in his seat and take the controls of the plane for a couple of minutes. It was the kind of thing that you weren’t supposed to do and that in today’s post 9/11 world would definitely cost a pilot his job, or worse, but that back then was possible. My dad knew everyone who worked for Chalk’s and even though he had his own fishing boat that he took from Miami to Alice Town on North Bimini he liked to fly and liked the Grumman Mallards in particular.

These planes were incredibly sturdy and would fly in almost any kind of weather. Once in December of 1973, when my parents were divorced and my father had taken the three of us to the island for the weekend, we were getting ready to go back to Miami but a bad storm was approaching and we didn’t know if the plane that was scheduled to land would make it. I remember that it seemed to bounce over the heavy chop in the bay between the north and the south island and when it was still in the shipping channel and where it would have to turn ramp next to the customs house the wind was so strong that the tip of the right wing was under water and one of the engines was flaming from the strain. In the end it made it up the ramp and the pilot didn’t seem to think that it was anything unusual. My dad asked him if he was still going to fly back to Miami that afternoon and he told us that it wouldn't be a problem. 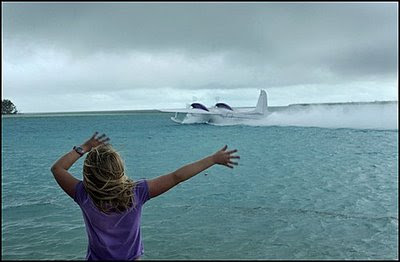 A Grumman leaving Bimini a few days before the December 2005 crash
So, we climbed up the stairs and took our seats and once airborne we found out that there would be another, unscheduled, stop at a Cat Kay, an island to the south of Bimini. The landing there was smooth enough, but the take off was hellish. The Grumman was heading straight into the wind and the waves were enormous. We smashed into about ten crests until finally we were airborne, and even my father was impressed by the pilot’s ability and the plane’s strength.

That was the kind of outfit that Pappy Chalk ran, but nothing lasts forever and when he sold the airline in 1975 it passed from one financial group to another. The old Grummans continued to fly in the thirty years that followed but in this age of deregulation and cost cutting, maintenance is often overlooked, sometimes with tragic consequences. On December 19th, 2005 one of the Mallards crashed just off the coast of Miami Beach when its right wing separated from the fuselage due to metal fatigue. All 20 people aboard perished. It was Chalk’s first and only fatal crash.
Posted by John Hemingway at 7:46 AM 4 comments: