Recent polls say that Obama and McCain are neck and neck and that who will win in November is anyone’s guess. Still I find it hard to believe that any intelligent American, after eight years of the Bush administration’s “slash and burn” approach to politics, could find it in themselves to vote for another four with John McCain.

Fundamentally there isn’t that much difference between the two. Both support the War on Terror (Obama even praises Bush’s surge in Iraq, saying that it "has succeeded beyond our wildest dreams"). Both are beholden to the major corporations and banks that brought on the current economic crisis in the States. Neither is in favor of a “single-payer” national health insurance plan, similar to the Canadian and European models. Of course, being successful politicians, they long ago learned that you don’t bite the hand that feeds you, and that means the Health Management Organizations and all the defense contractors who will continue to rack in their obscene profits no matter who ends up in the White House.
The real difference lies in their choice of vice-presidential running mates. Obama picked Joe Biden, who is about as “insider” as you can get in Washington. He is also connected by the umbilical to the country’s largest credit card companies. He spearheaded S-256, the “Bankruptcy Abuse Prevention and Consumer Protection Act of 2005”. It is a law which essentially strips people of the kind of protection they used to have, leaving at the mercy of their creditors, almost always the credit card companies. He is a man who has been bought and paid for by these corporations and America being America there is nothing exceptional in this. It’s just the way things are done.

McCain’s choice, however, is a reminder, should anyone need one, of how nasty the elite of America can be when the chips are down. When the Democrats finished their convention in Denver with Obama’s nomination in a stadium filled with 80,000 spectators from all over the country and the world, the Republicans were in trouble. Their candidate was trailing in some polls by almost ten percentage points and all you had to do was look at Obama’s bombastic speaking style and compare it to the mousy McCain whenever he spoke and know that the jig was up. McCain was old (and full of cancer) while Obama was young and in his prime. The choice was clear, but that’s when McCain decided to throw the Democrats a screwball and he unveiled Sarah Palin, the Governor of Alaska.

Govenor Sarah Palin
Palin is a Jacobin. A radical fundamentalist Christian who believes that the US invasion and continuing occupation of Iraq is “God’s war” and who thinks that all young Americans should be over there fighting Islam, just as one of her sons is. She also thinks that homosexuals should be jailed (and perhaps even burned at the stake) and that “creationism” (a pseudo-science that preaches the world was created in just seven days) should be taught in all public schools. So convinced is she of the satanic properties of Charles Darwin’s “The Origin of Species” that she tried to have the book banned from the library of the small town where she was mayor, and when that didn’t work she tried to fire the librarian.

She is, as everyone knows, against abortion and proudly announced before the republican convention began that her pregnant seventeen year old daughter was going to keep her baby and that the “father” had been convinced to marry his girlfriend, even though he was quoted in one interview as saying that he didn’t “want to have anything to do with children”.

Palin is in favor of unlimited oil drilling in her state (even in nature preserves) and says that she is an avid hunter and eater of moose meat. What many people don’t know is that she is also in favor of aerial hunting of apex predators such as bears and wolves and has signed laws in Alaska making this unsportsmanlike and cowardly killing easier.

So why would McCain choose such an anti-environment, gay-bashing imperialist like Palin when over 70% of Americans are against the war in Iraq and are worried about the effects of global warming? Simple, because the Republican Party is not longer a democratic organization but a theocracy whose members for the most part believe, as the Bible teaches, in the Second Coming, the reign of the Beast and the number 666. They are Dominionists one and all and are preparing the world for that day when Christianity will triumph over evil.

A hardcore Christian Fascist just a heartbeat away from the presidency. What a comforting thought.
Posted by John Hemingway at 12:50 PM 13 comments:

Hopefully hurricane Gustav will veer off at the last moment and spare the city of New Orleans a second catastrophic storm in just over three years. It would be a bit of good luck for a city that has had more than its fair share of misfortune. But US meteorologists are predicting that Gustav will make landfall Monday morning close to where Katrina hit in 2005, and the mayor of New Orleans has ordered a citywide evacuation calling the approaching hurricane “the storm of the century.” 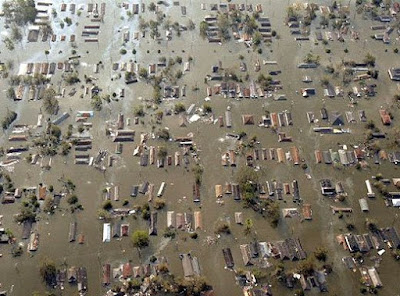 In August of 2005 over 1,800 people were killed when the levee system of New Orleans failed and eighty percent of the city was flooded. In the days that followed the world witnessed the plight of the many survivors who were stranded on rooftops, bridges, and in the Superdome. There was even a video of prisoners, who had been abandoned in their jail, screaming for help and frantically waving from behind metal bars as flood waters threatened to drown them. Bodies were seen floating down streets and were left to decompose in the hot sun for days before any effort was made to retrieve them.

It was a Dante-like panorama of pain and of absolute disregard for human suffering on the part of the Federal government that few in the United States were accustomed to seeing. The America that could spend a billion dollars every week on its foreign wars was incapable of taking care of its own. Yet, not everyone was displeased with what had happened. For the Bush administration the hurricane was an opportunity of sorts. It was a disaster, just as 9/11 had been, that would wipe the slate clean and would allow them to experiment with ideas and policies that under normal circumstances wouldn’t have been tolerated. Blackwater (a paramilitary company based in North Carolina, and with strong ties to the administration) sent its soldiers of fortune, the same mercenaries that were being massively used in Iraq against the local population, to New Orleans with orders to shoot to kill any of its hungry and increasingly desperate citizens who dared to oppose them. The Blackwater soldiers were allowed into the city almost immediately after the storm ended, while Red Cross workers with medical and relief supplies were kept from entering the disaster area for days.

The Red Cross said that they were told by the government that they couldn’t come in because that would be a sign to the residents who had left that they could return and begin rebuilding. Which, of course, was the last thing that the Bush Administration wanted. Whole sections of the city, the predominantly black and poor ones, had to be cleared. Nothing short of a North American “ethnic cleansing” of the Big Easy would do. This is what the Neocons wanted and what they got. New Orleans lost a third of its population and to this day entire neighborhoods are uninhabitable. The Federal money that had been promised to help people rebuild their lives and homes never arrived.

In this way, the priorities of the oligarchy that rules America were clear. The foreign wars would continue, whatever the cost, while New Orleans, the birthplace of jazz and a integral part of America’s soul, would become just another test site for experiments in social control and corporate plunder.