Recently when I was in Bimini I asked a few people if there had been any signs of the infamous BP tar balls that have been washing up on beaches throughout the Gulf. I was worried that Bimini, sooner or later, was due to get its unfair share of the toxic gobs due to its proximity to the Loop Current and to the Gulf Stream. Fortunately, I didn't see any, but one of the reasons for this might be the report from the Istituto Nazionale di Fisica Nucleare (National Institute of Nuclear Physics) of Fascati Italy. According to Gianluigi Zangari, a theoretical physicist and complex and chaotic systems analyst at the Italian research center, the Gulf Loop Current, as of 28 July, has effectively stalled because of the BP oil disaster. According to Zangari this could have catastrophic ramifications on the planet's ecosystem as early as 2011, resulting in widespread droughts, floods and crop failures. The Loop Current is considered  one of the major "motors" of the Gulf Stream, which in turn is responsible for keeping a good part of New England and Western Europe temperate during the winter.  Zangari is now looking for evidence that the Loop Current is reestablishing itself.
Posted by John Hemingway at 4:09 AM No comments:

A new start for Bimini

What a difference five years can make. In 2005 I flew to Bimini from Ft. Lauderdale on a Grumman Albatross and spent one of my nights on the island at the Compleat Angler hotel. Now, of course, the seaplanes are gone, as is the Compleat Angler. The fatal crash in December of 2005 put an end to the over 80 years of Chalk’s relatively accident free service, just as a fire, barely a month later, would destroy the historic inn. The NTSB investigation into the plane crash discovered that the airline had “failed to properly repair the fatigue cracks” in the Albatross’s fuselage while no one really knows how the blaze at the Compleat Angler started. Walking down King’s Highway (one of two roads on the island) you can still see the foundation and the concrete chimney of the hotel’s fireplace. Nothing has changed since then and as far as I know there are no plans to rebuild the inn, which had become a kind of unofficial museum for the island and a shrine to my grandfather with an autographed copy of one of his novels and many photographs of his fishing exploits. 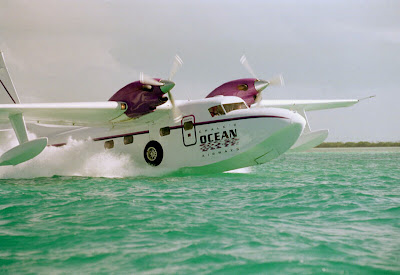 Chalk's Grumman Albatross landing in Bimini
For my father there was never any question about staying at the Compleat Angler so long as Helen Duncombe owned the hotel. She and her husband Henry had built the inn in 1935 and while other places might have had swimming pools, or marinas or fancy restaurants, nothing could compete with my father’s childhood memories. Whenever possible he took me to the same room where he and his father had slept. It was up on the second floor and had a view of the Blue Water Marina across the street. It was small by today’s standards, with two single beds and an ancient, wood burning stove in the center. The stove was there for heating, as it could get cold in the winter. When I was eight I remember asking my dad about the stove and he said that I should never touch it during a storm. Years back, when he was a year or two younger than I was then he’d been sitting on my bed and my grandfather was on the other side of the room near the door. There was thunder outside and heavy rain and my father had made the mistake of walking to the stove and touching it to see how hot it could get when a lightening bolt connected with the hotel and threw him back against the wall. It knocked him unconscious and he said that Ernest had picked him up and carried him out in to the rain to find a doctor. 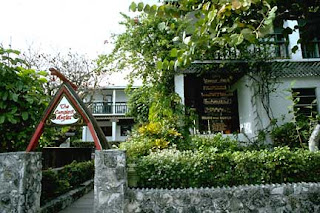 The Compleat Angler before the blaze
My father also told me about the boxing matches that Ernest organized on the island. He was passionate about fighting and in 2005 I asked Yama Bahama (William H. Butler, Jr.), a native of Bimini and one of the greatest welterweight fighters of the 1950s, if it was true what they said about my grandfather, that he’s set up a ring where the seaplanes used to land and that young men would come from all over the Bahamas to knock him out, but that none of them ever did. Yama told me that while he had never seen Ernest fight his older brother had and that in his opinion Ernest always won for the simple reason that none of his challengers had any professional training. Many of them were big, really big, and incredibly strong but Ernest had technique and that made all the difference. 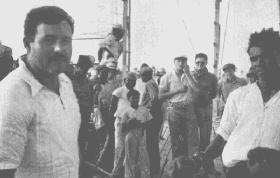 Ernest boxing in Bimini, 1936
“He used his head,” said Yama, “and while he’d sometimes get beat up pretty bad he knew a thing or two about fighting, see? And those guys never had a chance.”
The Bimini Big Game Club is right across the road from where I spoke with Yama.  Like a lot of things on the island it had seen its better days. In 2008 it shut down due to the economic crisis and its effect on tourism. But the fact that it’s now reopened can definitely be seen as a turning point for Bimini. After an extended period of mala suerte, starting with the Chalk’s crash and continuing with the destruction of the Compleat Angler, its new owners are optimistic about the future. It’s now a “Guy Harvey Outpost”, the first in a series of resorts that will mix Caribbean pleasures with Mr. Harvey’s renowned passion for Blue Marlins, the sea, research and conservation. I have to say that I was impressed by what I saw there last July. The hotel looks great, the food is excellent and the staff very friendly and helpful. With any luck at all the reopening of the Big Game and its marina will put Bimini back on the tourism and big game fishing map where it belongs and that other good things for the island will follow. 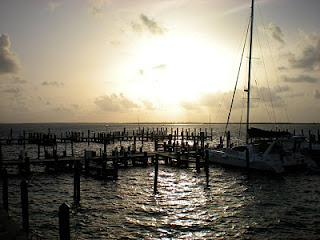 The Bimini Big Game Club marina at dawn
Posted by John Hemingway at 10:57 AM 2 comments: