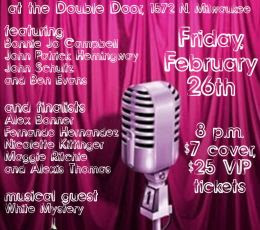 Windy City Story Slam
Here’s a heads-up for anyone in the Chicago area. I’ll be speaking and doing a book signing at the Hemingway House in Oak Park on Thursday the 25th and on the 26th I’ve been invited to take part in the Windy City Story Slam. It’ll be my first time at the Hemingway House and after this I’ll have seen all of his homes except for the Finca Vigía outside of Havana (which for a US citizen like myself is just a tad more difficult to visit). Eventually, however, I’m sure that I’ll make it to Cuba, too. The government down there, in collaboration with the American  Finca Vigía Foundation, has been doing a lot of important work in saving my grandfather’s island hideaway from the ravages of Cuba’s humidity, termites and tropical storms.

Chance encounters are everything in life and if I hadn’t met Bill Hillmann in a bar during the Fiesta of Pamplona last year I probably wouldn’t be speaking in Chicago at the end of this month. Bill, unlike my grandfather, actually runs with the bulls during San Fermin. Ernest was very good at popularizing and reporting on what he saw during his visits to Spain but he was smart enough to steer clear of the Toro Bravos, the fighting bulls that race through the streets of Pamplona. Having already had his brush with death on the Italian front during the First World War when he was hit by an Austrian shell, he probably didn’t feel the need to risk it all again and again as runners like my friend Bill do every year during the Fiesta. Bill, a talented writer in his own right, is a native of Chicago, and I think it only fitting that I should be invited by him to his home town to speak and to reconnect with a city that perhaps more than any other created the man whose works have influenced generations of writers. If a sense of place is, as they say, at the core of any great author, then what could be more important than the town where Ernest was born and raised?
Posted by John Hemingway at 11:13 AM 5 comments: