Yoshi Nagasaka is a talented artist and a good friend of mine, and I thought that today, as a way of introducing him, I’d reprint the piece that I wrote in 2005 for the catalog of one of his exhibitions.

I met Yoshi in the summer of 2001. He was living in the center of Milan not too far from the Duomo in a two-bedroom apartment that was literally packed with his paintings.
An uncle of mine had 'discovered' him while vacationing on Lago Maggiore. He was so impressed with the work of this Japanese expatriate that he gave me his number and said that I should scout him out in Milan and find out if he would be interested in doing the poster for the Ernest Hemingway Society's bi-annual meeting in Stresa. He was convinced that Yoshi's minimalist portrayals of the landscape surrounding the lake and the own of Stresa would be perfect. 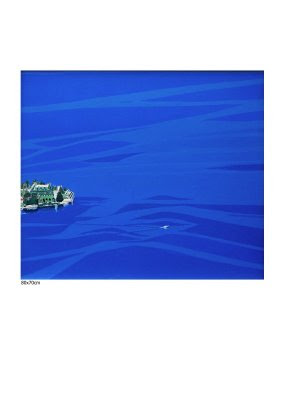 Lago Maggiore Isola Bella nel blu, Yoshi Nagasaka
And indeed they were. They captured perfectly the romanticism and essential beauty of an area that my grandfather had once defined as one of the most beautiful places on the planet.
In one painting you could almost imagine Frederick Henry rowing silently across the waters towards Switzerland. In the twilight of a summer evening the mist was obscuring the mountain range in the distance beyond Isola Bella. 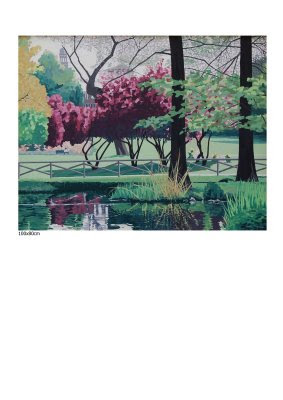 Tarda Primavera al Parco Sempione Milano, Yoshi Nagasaka
Many other paintings were of Milan. People sitting on the steps of the Duomo or passing through the Galleria not far from the hospital where shrapnel was removed from my grandfather's legs. Intimate views of a city that Yoshi knew well and that had been fundamental in Ernest's life.

After leaving his house I kept thinking how amazing it was to find this kind of talent hidden so carefully in a run-down building in the center of postindustrial Milan. The Milanese, it's true, have a habit of thinking of their city as the cultural capital of the country and yet here was a jewel in the midst that they'd virtually ignored. An ignorance, I was sure, that wouldn't last forever.
Posted by John Hemingway at 11:52 AM

Hi, John. I wrote a letter for Jô Soares. Now we must wait...but also we can wait the sucess of Gerald´s opera! Jô likes this kind of sincronicity.
I liked Yoshi´s pictures. I think writers must establish bridges and write about another artists. I did this for a young friend of mine that committed suicide at the age of 22. His painting is at www.cavecave.nom.br
It´s different from Yoshi, but interesting too.
Abraços do Lúcio Jr.

You're right, we'll just have to wait and see what happens:-) I tried going to the blog of your friend's paintings but the link was no good:-( Are you sure it's correct?
Abraços,
John

OK, I got it. Very nice! I just had a quick look, but I'm going to go back when I have more time.
Abs.
John

John, have you ever met Contardo Calligaris in Milano?
I´m curious.
Abraços do Lúcio Jr.

Ciao Lùcio, Yes, I did meet Contardo in Milan in May of this year. A great guy:-)

I hope you find this interesting.

John, also a brazilian site (www.digestivocultura.com.br) asked who is the contemporary classic that must be read. One girl answered...

Caro Lùcio,
It's good to see that there is still interest in Ernest in Brazil, but also in transvestites and gender (it being one of the themes of Ernest's work and of mine).

Ciao, John. Do you know what Madonna Kolbenschlag wrote about Hemingway in a book called "Kiss Sleeping Beauty Good-Bye"?

What an interesting title! What does she have to say about EMH?

Ciao, John. I´ll make an article and send it to you.
Abraços do Lúcio Jr.