Ernest was not your grandmother!

I did quite a few interviews while I was in Pamplona. Another fellow member of the Peña de los Gatos did the organizing, but after the first few on television started to come out everyone else, it seemed, wanted a piece of the action and my appointments at that point started to snowball.

One of the side effects of all this media attention was that towards the end of my stay people started to recognize me on the street, which for me was very unusual. Here in Montreal where I live my anonymity “es total”, but in Pamplona people would stop me on the street or in bars and want to shake my hand or offer me “un buen scotch como gustaba al abuelo”. 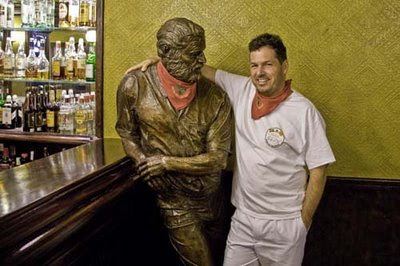 Me with a bronze statue of my grandfather Ernest at Cafe Iruna in Pamplona
Photo by Jonathan Knowles
Then there were those who weren’t so convinced. One guy in particular, who had certainly had more than his fair share of gin and tonics, saw me while I was having a drink with some friends and told me point blank as he held his glass level with my nose “El Grande Ernest no era tu abuela!” (the great Ernest was not your grandmother). “Tienes razón” I told him (you’re right), “He was my grandfather.” At which point he started to laugh and gave me a big bear hug.

All of this reminds me that one of the most beautiful things about San Fermin is the people themselves. The warmth and general good cheer that you feel there is immense. And while nothing is perfect, I had heard of fights and two of my friends were pick-pocketed, on the whole it was a great experience.
Posted by John Hemingway at 3:58 AM

John: I laughed a lot with this post.
Great photo!
Abraços do Lúcio Jr!

People say the craziest things to you sometimes in Pamplona, especially at night;-)

It must be very funny at Pamplona´s nights.
John, I have a suggestion: you can put the link to the youtube´s video about Gerald´s opera here in your blog.
Would´nt it be nice?
Abraços do Lúcio Jr.

Caro Lùcio,
I might just post a link to the "H" opera video. In the meantime, have a look at the review Gerald wrote about Strange Tribe.