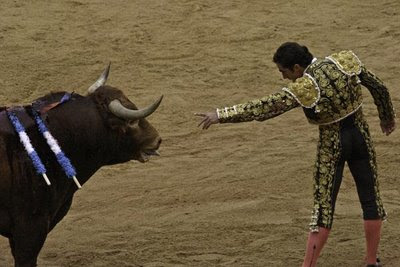 Photo by Jonathan Knowles
Even if you’re not into Corrida, the bullfights in Pamplona are a must. In fact, you don’t have to be an aficionado, or an expert in the use of the muleta or a partisan of the tremendistas, to understand what’s going on up in the stands. The Fiesta may be a party for everyone but that doesn’t mean that the political and social divisions of this beautiful town cease to exist for a week. On the contrary, in the Plaza de Toros the uneasy war of nerves between the left (mostly Basque) and the right continues in the cheap seats of the Sol Tenidas and the much more expensive areas in the shade, or Sombra. The well to do of Pamplona sit in the Sombra and many of them are serious fans of bullfighting, pious Catholics, and politically conservative. They believe in their King and a united Spain and if they were Americans they probably would have voted for Bush.
Those in the Sol seats wouldn’t have anyone to vote for this year in America, or any year, for that matter. They’re anarchists at heart and they love to mock, ridicule and/or disturb the powers that be whenever they get the chance. Most of them belong to a peña, a kind of social group, which during the Fiesta morphs into a serious partying machine with its own band, songs and subversive banners. The peñas are enormous, mobile entertainment brigades and when they go to the bullfights they bring their bands and food and wine and the area that they occupy becomes a vibrant sea of music and color. 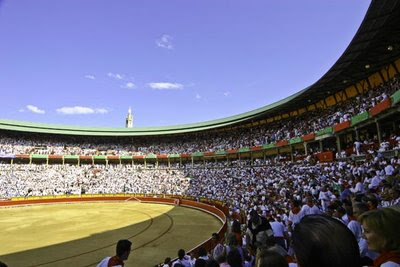 Photo by Jonathan Knowles
They bitch at power, they play their music, sometimes all at the same time, each peña with its own song, and when they’re juiced up enough on sangria and beer, which is always, they have food fights and dump flour and then honey and eggs on anyone who is below them or within their firing range. They also chuck beer cans and stringers out into the arena, which no one in the sombra sections would ever dream of doing. The members of the penas actually like corrida and are discerning aficionados but after almost four decades of the Franco dictatorship, rebellion is in their DNA. If they feel like doing something they just do it. No questions, no guilt. 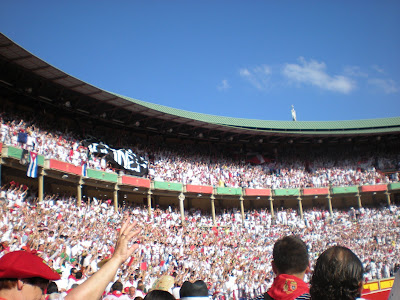 Fiesta is a time when everyone can truly express themselves and if that means creatively and, often times, humorously thumbing your nose at power and the people who oppressed your fathers and grandfathers, then you can do that in Pamplona, at least once a year, every year, in the second week of July.
Posted by John Hemingway at 4:51 PM