Photograph from 1924 Encierro in Pamplona

Here’s the photo that inspired the film being made about my grandfather by Sergio Oksman and Carlos Muguiro. 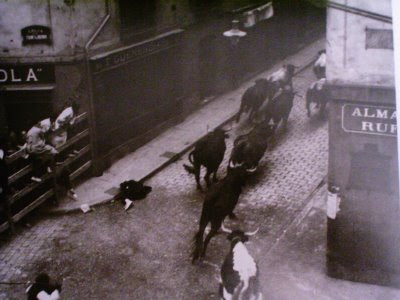 The photograph, as I mention in my post El Doble, was taken on the 13th of July, 1924 in Calle Estafeta in Pamplona, just a few moments before Estaban Domeño was mortally wounded, the first ever recorded death in an encierro. The man lying on the corner of the street, Pablo Guerendiain, was also wounded by one of the bulls. My grandfather would have been on the opposite side of the street, further ahead, looking down at the dying and injured runners from the balcony of his room at the Hotel La Perla.

Special thanks to Sergio Muguiro for sending me this photograph!
Posted by John Hemingway at 9:19 AM

John, if you want to receive the Minas Gerais Literary Suplemment for free, you must fit some information here.

I´ve already wrote about you to Camila, the Suplemment´s chairman.
If you have any doubts, write to me.
Abraços do Lúcio Jr.