A great American poet and translator, Charles Guenther, has passed away. A good friend of mine, Ed Steinhardt, knew Charles well and wrote his obituary, which I’m posting below. I never met Charles, but as a writer and a translator myself I cannot feel anything but profound admiration for his many accomplishments. 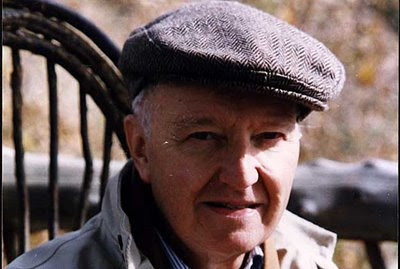 "It is the work, not the prize or the honor,
that matters most. The work endures."
—Charles Guenther

Charles Guenther, 88, who moved in the circles of E.E. Cummings, Marianne Moore, Howard Nemerov, Ezra Pound and many others, died Thursday in St. Louis of cancer. He is survived by his wife Esther, three children, five grandchildren and four great-grandchildren.
His only son, Charles Guenther Jr., told the St. Louis Post-Dispatch Friday that "Poetry and his family were his life." Richard Wilbur said Friday that "he had my esteem and admiration."

Guenther, a renowned American translator, poet and critic, was the author of some 10 books, including Moving the Seasons, Phrase/Paraphrase, The Hippopotamus: Selected Translations 1945-1985, The Complete Love Sonnets of Garcilaso de la Vega and the recent Three Faces of Autumn: A Charles Guenther Retrospective.

The St. Louis-born Guenther worked tirelessly to bring foreign poetry into the English language, while at the same time creating original work such as "Missouri Woods," "Snow Country" and "Union Station." He was also well-known for his personal encouragement of new and emerging writers, and was a frequent correspondent.

He was a prolific translator, almost unequaled in his field. The nation of Italy in 1973 bestowed upon Guenther its highest award, (Order of Merit of the Italian Republic, rank of Knight Commander) for his many translations of Italian poetry into English and his "long and valuable work permeating two cultures."

Other awards included election to the Academie d’Alsace, a several decades run as Regional (Midwest) Vice-president of the American Poetry Society (succeeding John G. Neihardt) and the 2002 Emmanuel Robles International Award in Poetry.

Guenther began writing poetry at age 15 while a student at Kirkwood High School in Missouri. In high school he began translating French and then Italian poetry, looking up the words in a dictionary and writing the definitions in the margins. "It’s hard to say why I started," Guenther recalled in 2006. "In a great poem, there is something magic, a haunting spirit. It’s so rare that you keep looking for it."

At age 17 he began work as a copy boy for the St. Louis Star-Times. By adulthood (and the emergence of World War II) Guenther had earned a college degree and went to work for what would become the Aeronautical Chart and Information Center in St. Louis. His translation duties there, while "not as interesting as translating poetry," were critical to the war effort and later flight safety.

Even though Guenther had vowed that he would stop translating by age 25, he wryly admitted he "never did stop." Evenings and weekends he began a relentless enterprise of translation, largely translating from "raw text" or work that had as of yet not been translated into English.

"In 1940, for instance," Guenther recalled, "I read that Superveille was considered the ‘greatest living French poet.’ "I wrote him for permission to translate ‘Les Amis inconnus.’ When he told me I had done a "polishing job" on his poems, I was elated. But I soon realized that one doesn’t "polish" Supervielle; his strength is in his simplicity."

Other luminaries who would become friends included Ezra Pound, who Guenther met in 1951. After sending one of his translations to Pound (while Pound was incarcerated at St. Elizabeth’s Hospital) Guenther received back, "almost immediately, a postcard with this scrawled message, ‘I don’t write letters; I receive them.’ It was the start of a lively correspondence with this fascinating, obstinate poet who had put new vigor into American Literature."

By 1953 Guenther was putting his own vigor into something new: that of reviewing books for The St. Louis Post-Dispatch. "When that first review appeared," Guenther later recalled, "I considered reviewing a ‘civic honor. I still do."

Guenther’s reviews became a virtual Who’s Who of American Literature. Names such as Stafford, Jarrell, Lowell, Hughes, Van Duyn, Cummings and Eliot graced his newsprint. There were other names, too, like Pablo Neruda, Jean Wahl and Salvatore Quasimodo.

Guenther’s work as reviewer also dove-tailed with his own work as poet and translator. "The Post-Dispatch gave Guenther a wider readership than many poets have," said Jane Henderson, that paper’s book editor. By 2003, with his retirement from the Post-Dispatch, Guenther had amassed an unparalleled half-century of reviews.

Even in retirement, Guenther maintained a tireless regimen of work and an occasional review. His last book, Guardian of Grief, (selected translations of the 19th century Italian poet Giacomo Leopardi) will be released in August. In characteristic Guenther-style, he expressed in his introduction to Guardian of Grief his ardent hope that "the poems may bring a renewed interest in, and appreciation of, Leopardi, his life, his times and his work."

"Past and present and future are not disjoined but joined," Walt Whitman wrote. "The greatest poet forms the consistence of what is to be from what has been and is. He drags the dead out of their coffins and stands them again on their feet."

For the work of poets he translated, living or dead, Guenther bestowed a certain element of immortality. "My own pratice," said Guenther, "When translating early poets is to place them in their own time, with a hint of antiquity, avoiding the grossly archaic language of their contemporaries." He summed up the process as, "My purpose is to make a poem from a poem."

A poem by Jose Agustin Goytisolo (entitled "The Difficult Poem"), which Guenther translated and is the last selection in The Hippopatamus, (1986) seems to sum-up the translation process.

The poem is inside
and doesn’t want to get out.

It pounds in my head
and doesn’t want to get out.

I shout, I tremble,
and it doesn’t want to get out.

I call it by name
and it doesn’t want to get out.

Later down the street
it stands before me.

John: I made 2 translations of DA Levy poems to portuguese: Rose That and Litany of the Green Lion. They´re on my blog.
Thanks for the link!
If you want to send me letters, my adress and complete name is:

I think that to translate something well from one language to another is an art and he was one of the best of them.
Abraços,
John

Charles was a great guy. I met him in the mid-'70's. It was my great fortune to be able to publish some of his translations over the years. I was able to see him a week or so before he died. Our conversation was typical: poetry, translations,writing, other writers, and works in progress. I shall miss him.
-Anthony J Summers
Cornerstone Press

I hope you enjoy. Have you received my article "A Estranha Tribo de John Hemingway"? I´ve talked with Camila (from the Supplemment) an she said to me she liked it and check the possibilty to publish it. Good news, but we must wait.
Abraços do Lúcio Jr.

Nice translation of Leopardi's poem. Being here, by the beach, near L.A. I like the line "and sweet it is to drown in these seas".
I read your article on Strange Tribe and thought it very good. Let's hope that it gets published!
Abraços,
John

For the past few years, I have been working on an essay on Cocteau's Orphic Cycle, and thanks to your recommendation of Charles Guenther, I believe I have found the 'missing piece' in a first-rate translation of Cocteau's L'Ange Heurtubise. Thanks John... and thank you Charles. MIke U.

Ciao Mike U,:-) Glad that I could be of help!
cheers,
John