Thanks to an invitation from Adriano Ossola and his annual event, éStoria, I was finally able to visit Gorizia and Caporetto and many of the other towns that are featured so prominently in my grandfather’s novel “A Farewell To Arms”. This year marks the 100th anniversary of the beginning of the First World War and Ernest Hemingway and his brilliant, anti-militarist, portrait of the Italian defeat at Caporetto have not been forgotten.

As anyone who has read his book knows the young protagonist Frederic Henry gives a very detailed description of Gorizia and of the Austrian front and most people assumed when it was first published that like “The Sun Also Rises” here was yet another autobiographical novel from the young American author. But Ernest never visited Gorizia or Caporetto, nor did he ever set foot in the town of Plava where Frederic Henry is wounded in the knee from a bomb blast. Nor did my grandfather stagger away from that blast with a bleeding Italian soldier over his shoulder, at least not on that front. He was wounded near Fossalta di Piave almost a year after the battle of Caporetto.

Still, even today there are many people who are convinced that Hemingway was there. In Gorizia a volunteer at the event told me that he had proof that Ernest had been in town and that there was a photograph of him standing next to his ambulance with a group of friends. “Era qui! Proprio qui!” He said excitedly, “right here”, forgetting as many admirers of my grandfather often do that Ernest was as good a journalist as he was a writer.  He researched his books extensively and in this case he interviewed people who had fought in the battle of Caporetto and he read whatever accounts of it he could find.

The battle represented a turning point for the Italian army, its nadir, which would then be followed by a renaissance in terms of tactics, leaders and general good fortune. Over a hundred thousand soldiers would be killed or wounded on both sides. The destruction was immense, with whole towns and forests pounded to the ground by non-stop shelling, the dead bodies of men and animals littering the roadsides and mountains and the river Isonzo. To go there today it’s hard to imagine the kind of insanity that had gripped this part of Europe for so many months. The trees have grown back, the towns have been rebuilt, the Isonzo is as clean as it ever was with its emerald blue waters that are the delight of fly-fishermen the world over, myself included. But traces of the war remain. In the woods and by the riverside you can still find pieces of shrapnel and bullets and occasionally, if you have to dig, the odd unexploded shell. 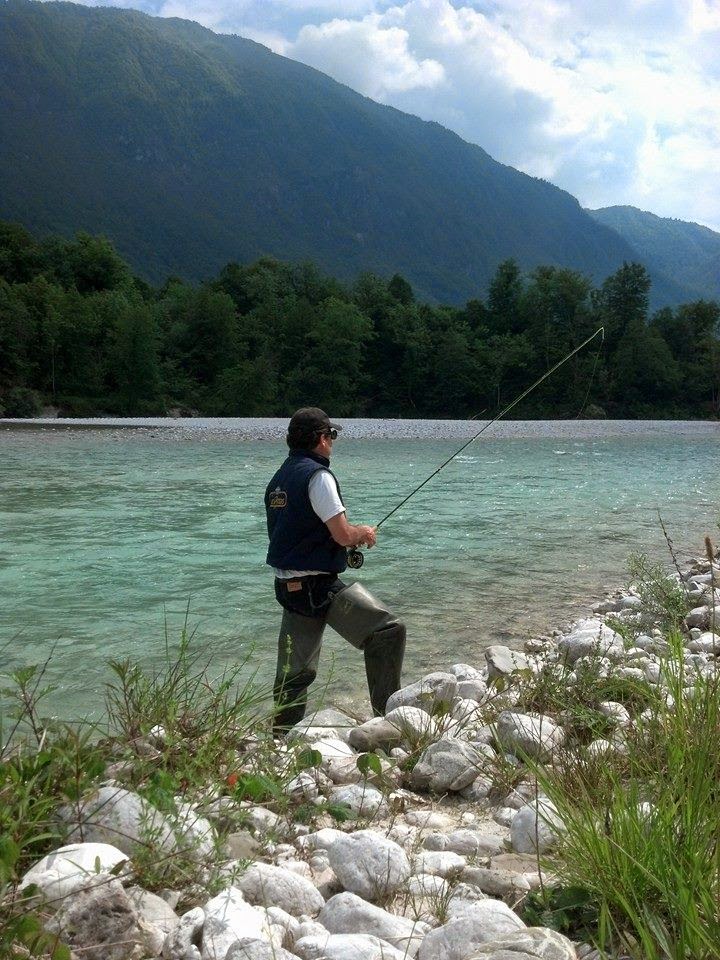 Fishing on the Isonzo

On the morning that I went fishing it was a beautiful day with a few clouds that were covering the highest peaks in a white mist. The water was ice cold with the snow-melt from the mountains and as I cast my line out into the stream I thought of the scene from my grandfather’s novel where the Carabinieri (the military police) are interrogating and summarily executing all the ufficiali or officers who had somehow lost their units, whether it was through desertion or just the chaos of battle, it didn’t matter to them. Frederic Henry hearing the gunshots understands that if he doesn’t move he’ll die and he runs as fast as he can towards the river, diving in and staying under water for as long as he can hold his breath to avoid the bullets above him. This is not his war he tells himself and all the things they say to get you to join up about honor and bravery, king and country are obscenities.

He had made his separate peace.

Excellent article by an excellent writer. Brought the obscenity of war and the peace that follows into a great descriptive narrative. It was as if the reader was there.

It is an honor to have the chance to try and speak with you. I am a young "italian-american" writer who fell in love with the works of your grandfather about six years ago when I was a nineteen year old kid still skipping college classes. I found a copy of his book "For Whom The Bell Tolls" while fixing a furnace with my grandfather in an old dingy basement here in my home city of New Haven, Connecticut. I have been determined to become a writer ever since and have written a number of things though I have not managed to find a way to get any of them published. I feel like I am a bit 'removed' from the normal literary crowd, seeing as where I'm from is not really too involved with the literary scene and I never did manage to graduate from college (still working on that from time to time). With that aside, I recently managed, after years of trying, to travel to Italy on my own after learning the language and finding a friend via the internet. While I was there I managed to see a couple of places including Rome and Florence and many little mountain villages in Tuscany. It was an extraordinary experience and I'd be lying if I told you that your grandfather did not play a huge role in my decision to get over there and see what it was all about. I sacrificed many things to be able to get there but I will tell you that I felt his spirit very strongly the entire time. Though I come from an italian-american family I have always mostly felt 'american' and have always been so very honored when I read the way that your grandfather, a real old school American, wrote about the country of my ancestors. He had a respect for the country that you will simply not find in many other folks. I picked up a few of his books that Pivano had translated while I was in Italy and they are like treasures to me. Upon my arrival back into the States I had been doing some more reading about him and his times in Italy (I always love to remember, especially after my first voyage!) and I somehow came to find out about your existence and then I even came to find that you can speak italian fluently and lived there for a number of years. I'm completely surprised and not only that but beyond honored. I feel it's a bit rare to find an american that speaks italian and of course it would be the grandson of Hemingway that is doing it. The life and family of the artist is always something that was particularly important to me and I believe I have found your blog here for a reason. I would really appreciate if we could speak. It would mean the absolute world to me. Please don't think I am looking for anything. I would simply appreciate the chance to talk with you immensely. The legacy of Hemingway means the absolute world to me and I always tell people that he, along with Johnny Cash, Bob Dylan and my own grandfather, was one of the greatest americans to ever live. Grazie for your time. My email address is mikegrassomusic89@yahoo.com - Sincerely, Michael Grasso