When I was a boy in Miami my teachers used to say that anyone could grow up to be President of the United States. Ours, they would tell us, was a democracy where all men were created equal and where even the poorest boy or girl could some day aspire to the nation’s highest office. That was the official propaganda and from time to time this message has been renewed with candidates chosen to make us all believe that it’s still true.

The latest reincarnations of this “rags to riches” myth are Barack Obama and Sarah Palin. Obama is the mixed-race son of an African immigrant, while Palin is the “hockey mom” with barely 19 months experience as governor of Alaska. Both are tangible proof that with just a little luck and determination you can do anything. America, like Disneyland, is sill the place “where dreams come true.” 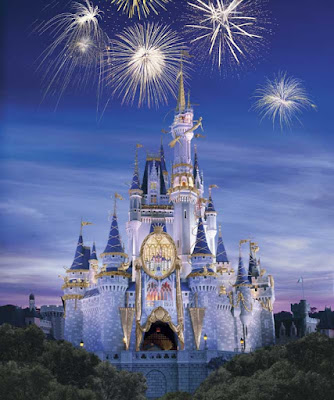 Disney's Magic Kingdom
The road to the palace in the “Magic Kingdom”, however, is fraught with peril. The campaign is long, sometimes lasting two years or more and the vetting process is severe. The corporate media asks probing and sometimes difficult questions regarding a candidate’s views on abortion and terrorism and taxes, and then there are also the religious questions. A presidential candidate in the US must believe in God and not just any god will do. As a nation at war with Muslim infidels an aspiring President or Vice-President has to show that his god has what it takes to protect America and defeat the forces that would do us harm. 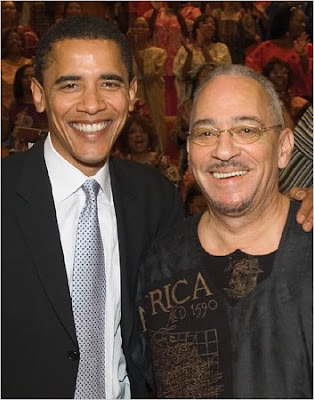 Obama and Wright
Senator Obama’s god almost failed us on this last point. His one time friend and close confident, his minister for over twenty years, the Reverend Jeremiah Wright, preached an ecumenical Christianity that was not afraid of delving into the darkest chapters of America’s history in race relations. An ex-Marine, Wright showed how America’s enslavement of Africans and near extermination of its native tribes was not the exception but the rule when it came to defining the country’s murderous soul. Like the old Romans our policy has always been divide et impera, and Wright feels that only by facing this fact and understanding it can we really change as a nation. This, of course, is sacrilege to the elite who run America. Seeing the truth of our history stridently conflicts with the disneyesque fantasy of the US as a peace-loving, multi-racial melting pot where everyone is a winner. Obama would clearly have to atone for his sins of his pastor, and a campaign was mounted in the corporate media to denounce Wright and demand that the senator from Illinois disassociate himself from his old friend. Which of course he did to keep his quest for the White House alive.

Sarah Palin’s god, on the other hand, is much more in tune with the times, and as a result has received scant coverage by the corporate media. She has spent more than twenty-five years of her life as a member of church in Wasilla Alaska, which is part of a fanatical Christian cult that is sweeping across America. The Governor, in fact, hails from the most radical stream of US Born-Again Evangelism known as “Joel’s Army,” an offshoot of “Dominionism” or what is sometimes also referred to as the “Latter Rain” cult or the “Manifest Sons of God”. These committed soldiers of Joel’s Army (including Sarah Palin) have pledged their lives to Jesus and to the fight against evil in what they call the “end times” (the period before Judgment Day when the Lord will slug it out with the Devil to see who wins). As Joel's Army's Canadian leader, Todd Bentley, explains, “An end-time army has one common purpose -- to aggressively take ground for the kingdom of God under the authority of Jesus Christ, the Dread Champion…The trumpet is sounding, calling on-fire, revolutionary believers to enlist in Joel's Army. ... Many are now ready to be mobilized to establish and advance God's kingdom on earth.” 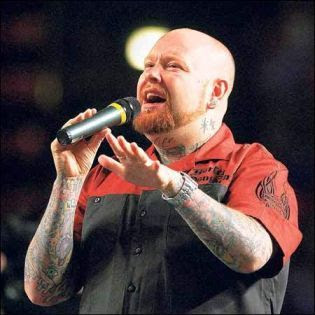 Joel's Army "General", right-wing evangelist Todd Bently
An army of mobilized religious fanatics, exactly what’s needed if your country’s end goal is the total domination of the world’s dwindling natural resources. Think of all the oil rich nations that have yet to be subdued! Indeed, America’s corporate rulers couldn’t have asked for a better representative than Sarah Palin, and none of them will ever ask her the difficult questions that were put to Obama or his pastor. It’s best to keep that kind of information under wraps, lest anyone discover the truth before its too late.
Posted by John Hemingway at 9:36 AM 6 comments: