You've got to hand it to America's mass media. No one but no one is as expert as they are in dumbing down the population. With the country's economy teetering on the brink of a financial disaster that will probably make the Great Depression of the 1930s seem like a cake walk, do the New York Times, the Washington Post or any of the other elite news filters ever try to get at the root of this mess and explain to their readers that they have been taken for suckers once again? No, they don’t.


Nor do they ever write about the economic and moral black hole of our wars of conquest in the Middle East. This is a taboo subject in America and it’s a shame because the estimated 1 trillion dollars that is spent every year on the Military/Industrial complex in the United States could easily pay for all the state deficits ballooning out of control from California to Maine, or the mortgages that millions of Americans can no longer afford to pay on their homes, or the public health-care programs that only government employees have ever had. There is, in fact, an enormous and ever-growing list of homegrown emergencies in America that need to be dealt with and fast, but don’t expect anybody in the next administration to get around to it. That money has already been spoken for (by Wall Street and the Pentagon) and no one in the media is writing about this. It just isn’t newsworthy in the USA. 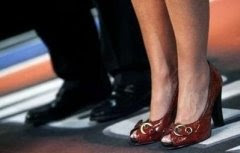 Sarah Palin's "Naughty Monkey Double Dare Pumps" available for $89.95
Instead, they talk about "Joe the plumber", the average guy who is worried about Obama raising his taxes, or about Obama's "radical ex-preacher", Reverend Wright and his “racist views” (he was the one who made the unpardonable mistake of shouting out in one of his sermons, and letting his anger be captured on video, “Goddamn America for what it’s done!” On the other hand, they don’t talk much about McCain’s advanced case of skin cancer or that many melanoma specialists are giving less than a 25% chance of living to the end of his first term should he be elected.

Yet, perhaps the most bizarre news item from last week is the $150,000 that the Republican Party spent on Sarah Palin's campaign wardrobe. She is not, we now discover, the working class, Hockey Mom that we thought she was because she wears designer clothes from Neiman Marcus, and ruby red pumps from Saks Fifth Avenue. No doubt, we’re all supposed to be shocked by this and given the incredible gullibility of Americans many people will in fact see this routine image make-over as a kind of betrayal. In other countries voters tend to understand that politicians are professional liars and that just about everything regarding their media image is contrived, but not in the USA. Subterfuge will not be tolerated in American presidential elections, because a man, or a woman, has to be what he or she was marketed as being. The important thing is “staying on message”, never deviating from the script.

The system may be rotten to the core, corrupt beyond anyone's wildest imagination, full of distorted images and unrealistic expectations, but the farce that is these elections has to be believed. The lies and crimes at the root of our precipitous decline have to be ignored, at least until power can be successfully transferred from one faction of the nation's business party to the other.

It is the American way.

Posted by John Hemingway at 7:17 AM 9 comments: