Here's a short story of mine that was published in the Spring 2010 edition of Saw Palm, the Florida Literature and Art journal of the University of South Florida. 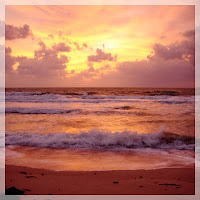 Miami Sunrise
Brylcreem Man
When he looked at himself in the mirror his long, black, wiry hair was as it had been the night before, disheveled and with a sheen that could have been mistaken for Brylcreem. His eyesight had never been that good and when he found his glasses he noticed the white roots and made a mental note to pick up a box of hair color. His girlfriend was still in bed and if he could find a pharmacy that was open he’d have everything done before she got up, but he was tired and feeling stressed and went for a walk on the beach instead.