Any man's death diminishes me

While Ernest Hemingway’s short stories are without a doubt some of the finest in American literature and perhaps the best of what he had to offer, his message in For Whom the Bell Tolls is what I like to think of when I think of my grandfather. When he quotes from John Donne’s Meditation XVII, “No man is an Island, entire of itself." Ernest evokes at the same time the tragedy of the Spanish Civil War and the reality of the human condition. None of us, in spite of what we may believe, or have been told, is ever alone.

We are all in this together, or as Donne put it “Any man’s death diminishes me, because I am involved in mankind." Still in hard times like these you can’t help but wonder if the mayor of Bay City, a small town in Michigan, ever had the time to read Donne or my grandfather’s novel and what he was thinking when he found out that he had allowed a 93 year old man to freeze to death in his home. 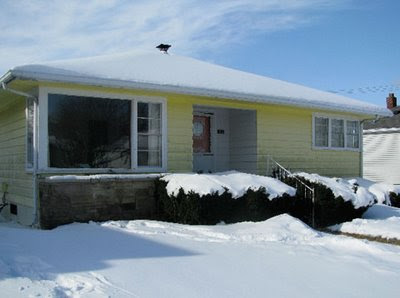 The Bay City house where Marvin E. Shur froze to death
Marvin E. Shur owed over a thousand dollars to the Bay City utility company and the company had put a “limiter”, a kind of automatic circuit breaker on Mr. Shur’s electricity meter. Over a period of ten days the limiter was designed to encourage the “client” to pay up, by slowly reducing the electricity that he could use. If, at any point, the 93 year old had decided to turn up the heating in his house (quite probable given the frigid artic temperatures outside, -23C/-10F) the limiter would have automatically shut off his power. The utility company says that Mr. Shur could have easily switched the power back on, but that would have meant going outside into the cold to flick a switch on the limiter and no one had bothered to contact the old man to tell him that he could do this, or to verify that he was physically capable of venturing outside.

Mr. Shur was a widower with no children and the city coroner estimates that he finally died of hypothermia two days after the limiter was installed on the 13th of January. On the 17th, his body was found by neighbors who noticed that the windows of his home had frosted over. Shur had tried to dress as warmly as he could with two pairs of pajamas, but it wasn’t nearly enough. The news of the death of this retied factory worker and World War II veteran, couldn’t perhaps compete with the torrent of corporate media hype surrounding Obama’s impending inauguration but it certainly had a lot to do with the country that the Prince of Hope was about to lead and the degeneration of America’s sense of solidarity and humanity.

Utility companies in many areas of the Midwest and Northeast of the US have been steadily increasing their rates, and for the poor, the unemployed and the elderly this is an enormous hardship. Often they are forced to decide between food or heating their homes. The mayor of Bay City, Charles Brunner (a democrat who later flew to Washington for Obama’s lavish inauguration festivities), has shown little remorse for what he has done. In fact, on the same day that Shur’s death was reported nationally the mayor voted with the town council to increase the town’s utility rates by 3%.

“We’ve gotten very creative in the ways we purchase power, but it’s a very complicated market and it’s an expensive market,” Brunner said after the meeting. “and we have to pass the costs on.”
Posted by John Hemingway at 7:36 PM 7 comments:

For those of you in the Columbus, Ohio area, I'll be talking about my memoir, Strange Tribe, and all things Ernest at OSU's Wexner Center Film/Video Theatre on February 17th at 7:00 pm. 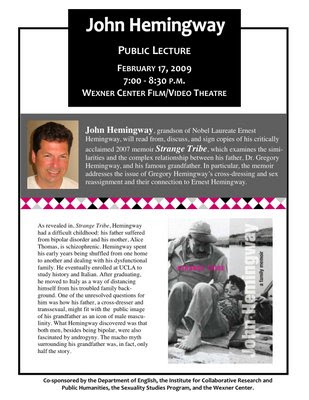