Taking it to the streets

I recently returned from Spain and I have to say that one thing that I really like about the Spanish is that when they get fed up with something, usually having to do with their government (local or national), they protest. And when that doesn’t work, when their elected representatives either ignore them or tell them where they can go stuff it, they riot. Of course, for someone like myself, politically more an anarchist than anything else, this kind of “in your face” response to bureaucratic obtuseness is most refreshing. In fact, when I heard about the recent riots in Burgos (250 kilometers due north of Madrid) and the 40 people who were arrested and the 11 injured policemen and how it went on for three days I wondered why nothing like that ever happens in the USA? Burgos, a town with a population of 179,000, is currently a half a billion euros in debt, and because the town doesn’t have a lot of money to throw around many of the social programs that its citizens depend upon have been curtailed or eliminated. These are hard times in Spain and while most people can certainly understand the need for frugality, the decision by the city government to build a parking lot under the town’s main road to the tune of eight million euros is not being frugal and was probably seen by many of the protestors as the straw that broke the camel’s back. 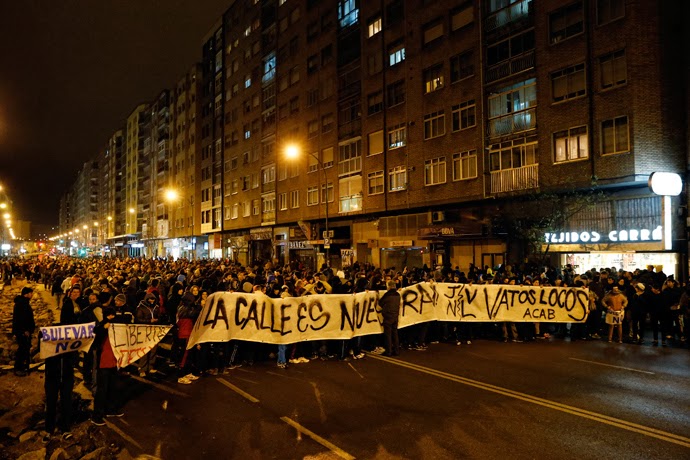 But as I was saying, if this can happen in Spain, in a small town with serious cash-flow problems, why aren’t people in the USA taking to the streets in the towns and cities that have filed for bankruptcy? Why aren’t the citizens of Detroit in Michigan and San Bernardino and Stockton in California as mad as hell and burning cars and trash cans like their cousins in Spain? Not only are their cities in debt (in Detroit’s case for over 18.5 billion dollars) but their government in Washington has been spending trillions since the crash of 2008 to bail out the infamous “too big to fail banks” and to fund the country’s never ending wars in Afghanistan, Iraq and Syria. Some observers have called this orgy of “quantitative easing” (printing money like there was no tomorrow) the largest transfer of wealth from the poor to the rich in the history of mankind. But in the midst of this historic theft, with all this money going to the Nation’s defense contractors and bankers why haven’t Americans reached their point of no-return? Why haven’t they taken to the streets to demand a fair share of what their tax dollars have been subsidizing all these years? I hate to sound like a communist, but if the wealth of any nation is created by the people who actually live and work in that country then it seems to me that the average American is getting royally screwed.

Indeed, for all the vaunted superiority of the American system and way of life we have forgotten that the government belongs to the people and that if it doesn’t respond to our needs and to our communities then it must be changed. In Spain they haven’t forgotten this and I am sure that as the economic crisis grows so will the protests.

As always with your writing, this is well-written and wonderfully executed. Makes one think and that is the mark of a great writer.

You pose a great question to the American people. When will it be Ya Basta time?
Andrea

Just do it. Our prime minister & government resigned.

Where is the outrage? Misplaced. They are told to despise and blame those beneath them instead of those who profit at their expense. And it seems to be working, John.